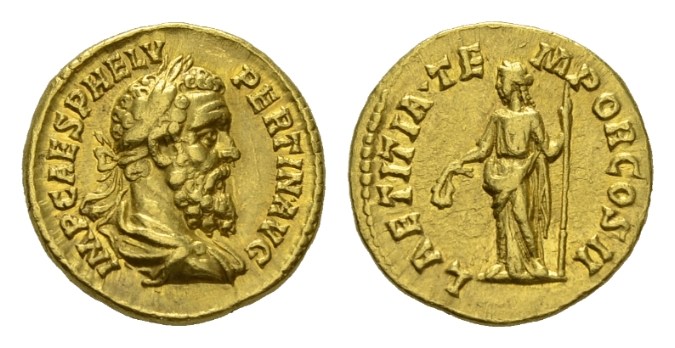 A self-made man who rose to prominence through dedication and talent, Pertinax’s career was illustrious. His father was a former slave and merchant whose wealth bought Pertinax a good education. Pertinax began his adult life as a teacher, but afterward he embarked on a military career. He rose through the ranks serving in Parthia, Britain and Noricum, subsequently serving as governor of several provinces. In 189 the emperor Commodus appointed him prefect of Rome, and he was still serving in that capacity when Commodus was assassinated on New Year’s Eve, 192. Though Pertinax has often been portrayed as an unimpeachable moralist, he was more likely an opportunist who was intimately involved in the plot against Commodus. After his accession, Pertinax may have viewed himself as a benevolent dictator, but the praetorians none the less murdered him after a reign of just eighty-six days.

There are no comments to display.